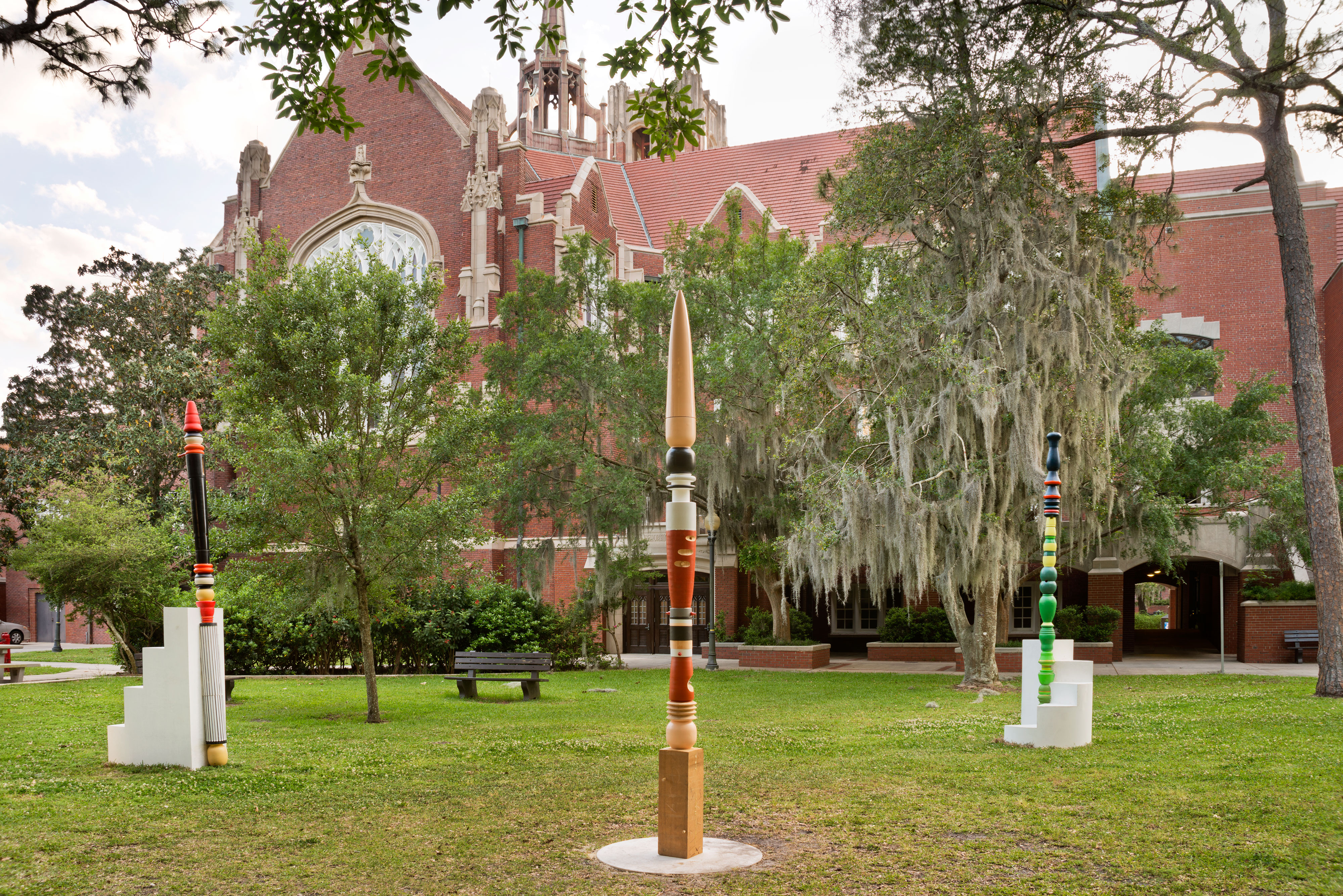 From the Press Release

The Periplanómenos Whistles is a sculptural installation that consists of three columns, each about 12 feet high. At the foot of each column is a concrete base that supports the column, and each base is of a different design that relates both to architectural staircases and platforms as well as to traditional display pedestals.
A closer look reveals a red mouthpiece parallel to an opening, located on various heights in each column. This, along with the title of the piece, indicates that the columns are in fact functional instruments that can produce sound.

The columns are made of Virgin Bald Cypress, an ancient tree that is between. This wood is unique because of its longevity and rot resistance, for which it was given the nickname “the wood eternal.” This characteristic is quite necessary for creating a wooden outdoor sculpture that will withstand the unforgiving Florida climate. Each column is carved out of a single trunk and painted to represent one of the species of birds that has become extinct as a result of massive deforestation in the region. This ultimately influenced and shaped the final appearance of the columns.

“A lot of my work has some kind of possibility of ‘activity,’ you can twist it, pop it, blow into it,” Tamir said. “Usually it involves sound, but at the same time, my work is mostly meant to be seen when it is not being used. In The Periplanómenos Whistles, the sound helps me to direct the viewer’s attention to what he cannot see or touch- the inside of the columns, the inside of our body, what exists beneath our legs down in the ground or high up above our heads. Sound also travels, it doesn’t last, it moves, creating a space for a moment and then it disappears. In a way, I think it is enough to see the mouthpieces in order to hear the sound that this piece can produce. Our imagination can bring to life sounds, smells, even people, you only need the right trigger to help you do it.” 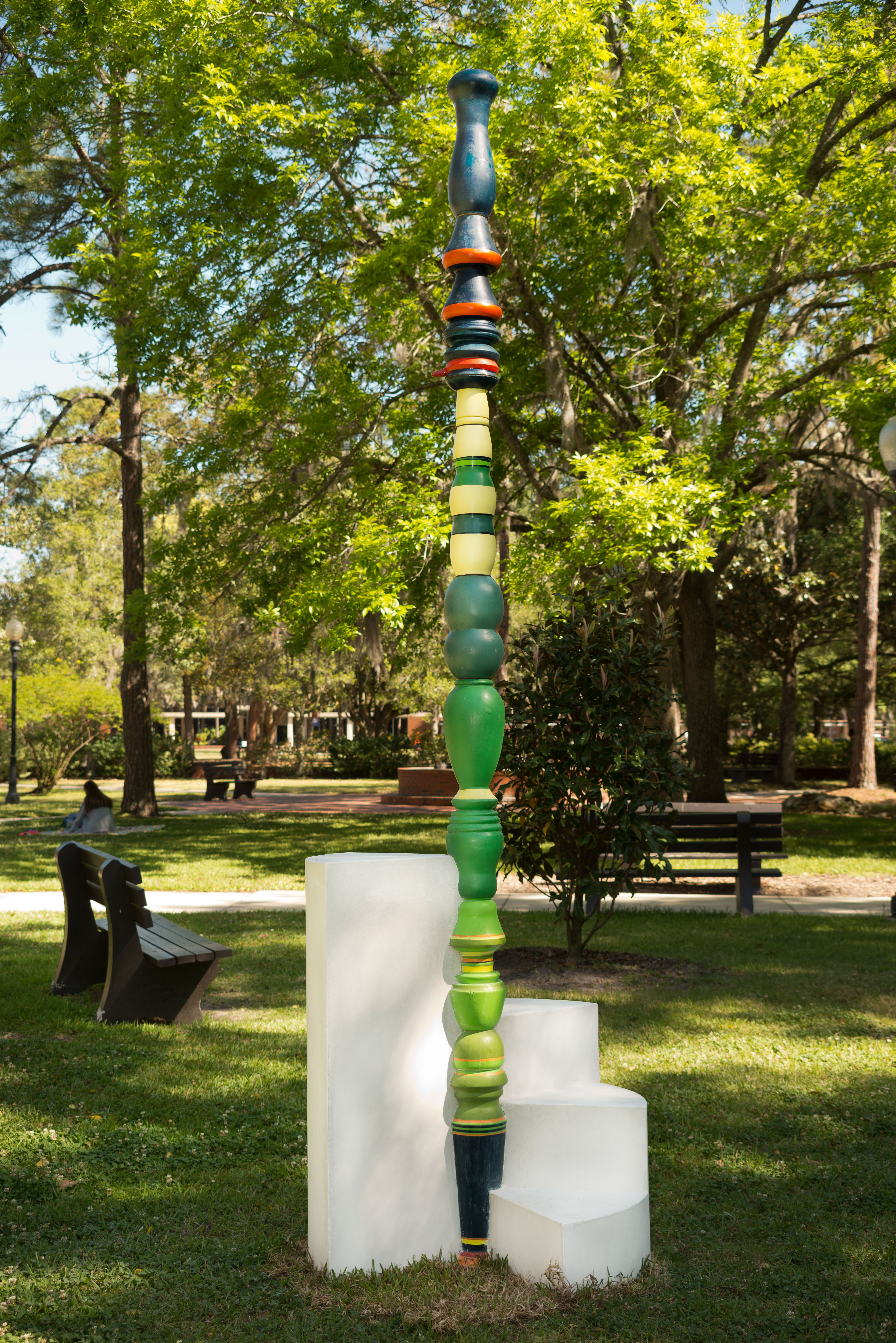 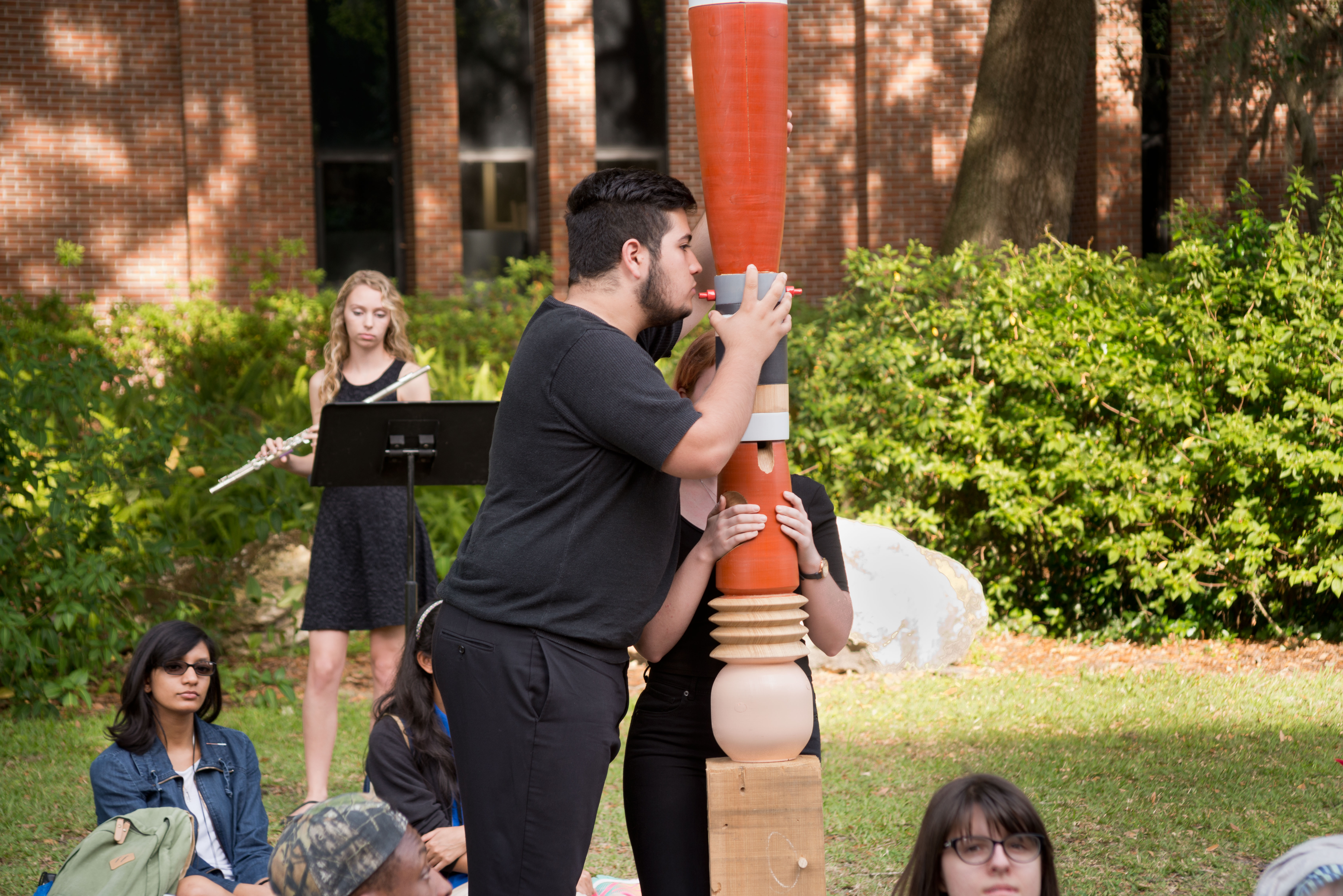 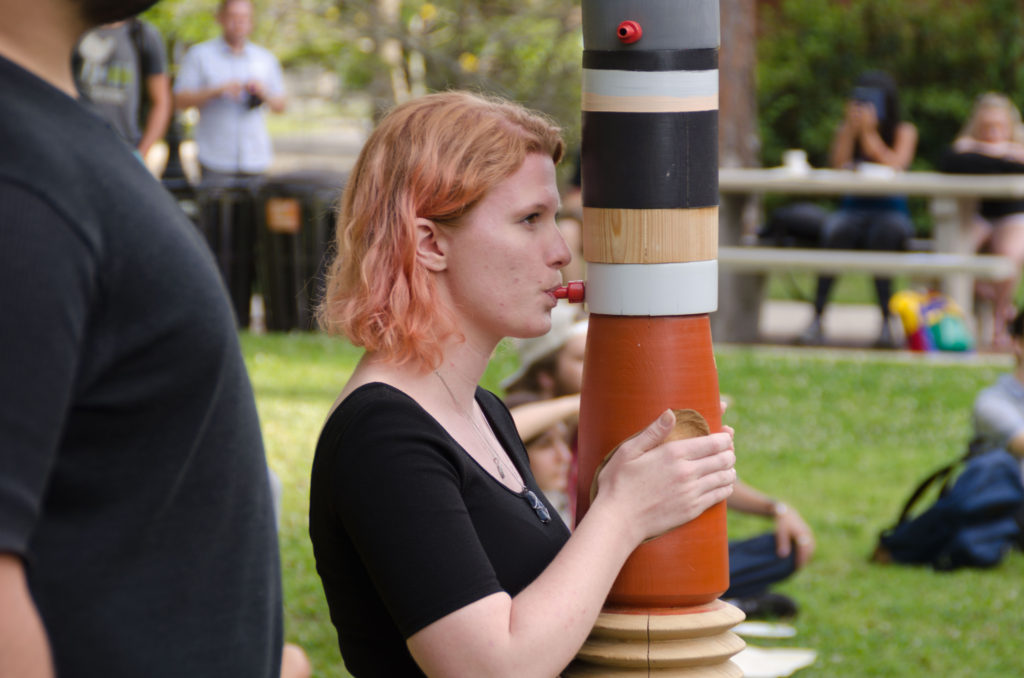 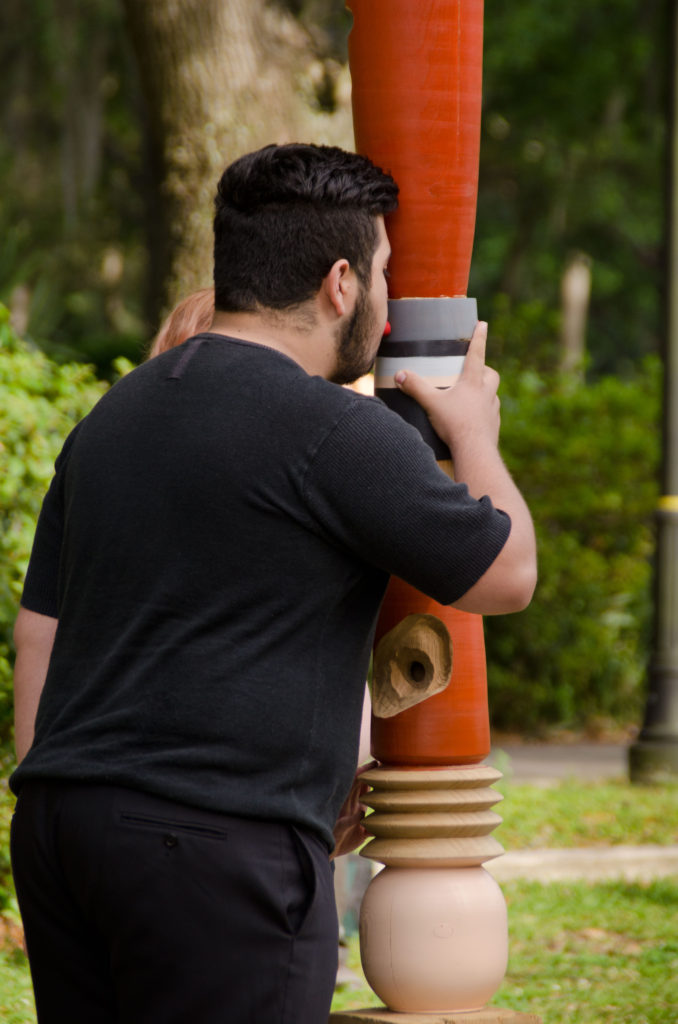 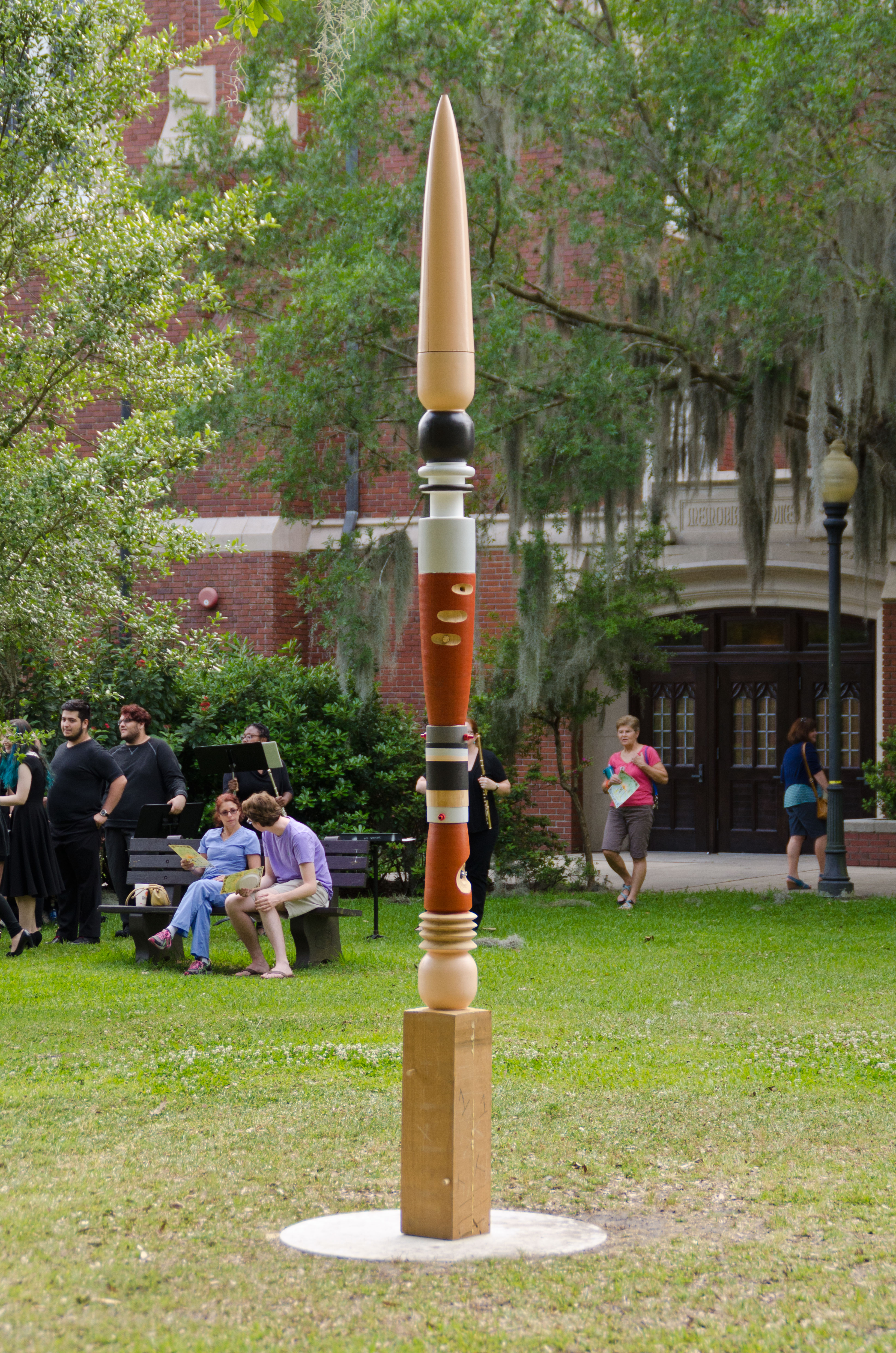 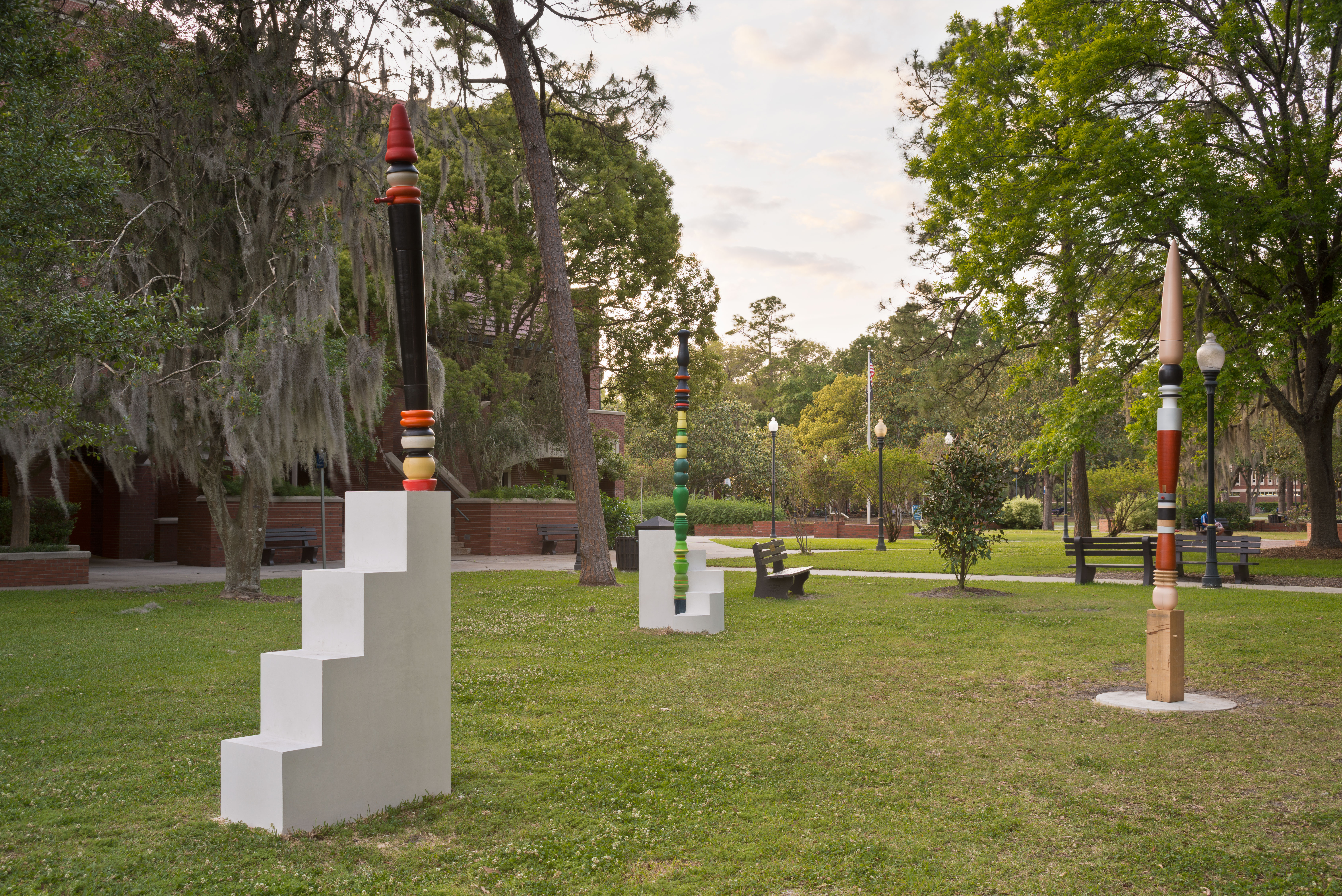 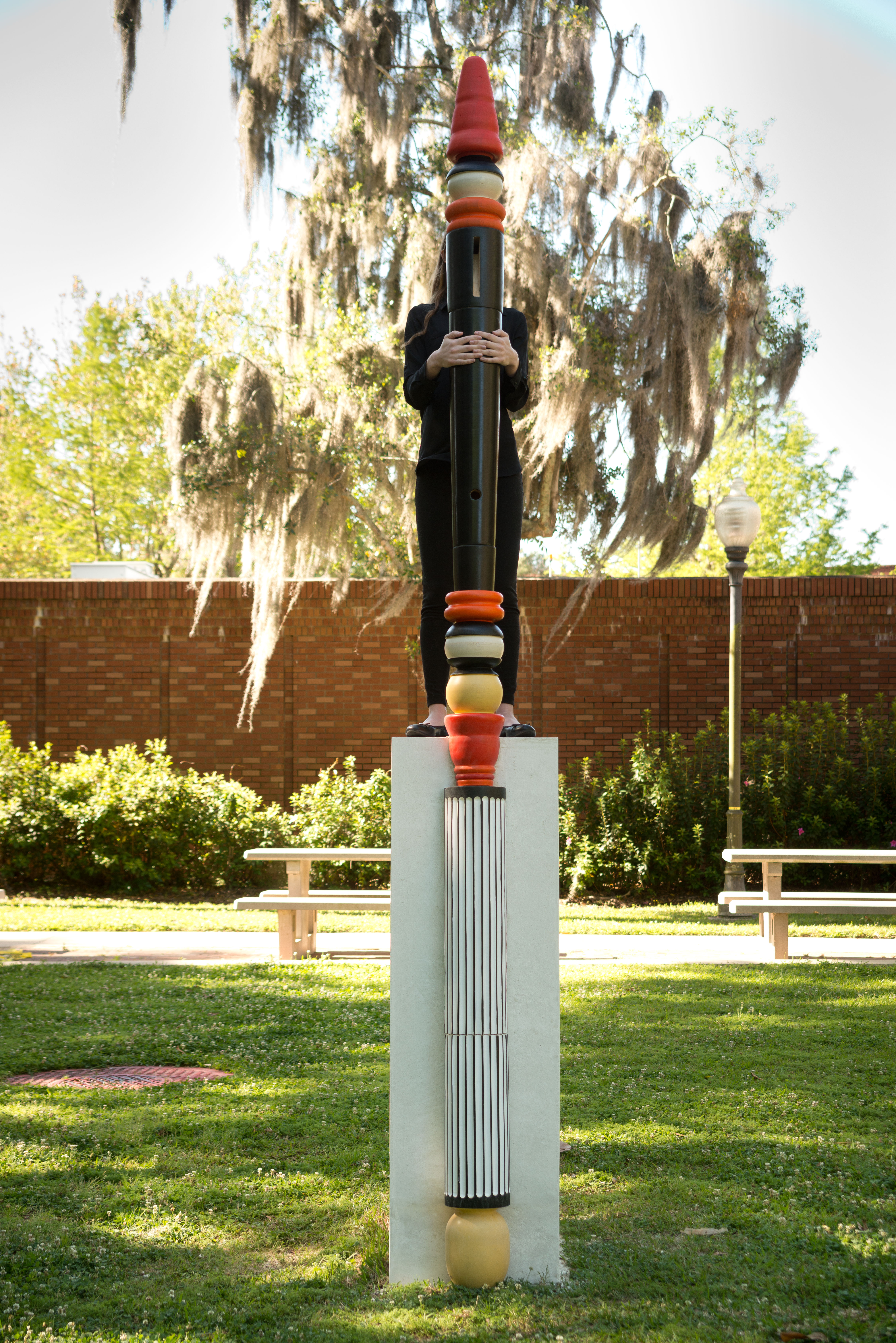 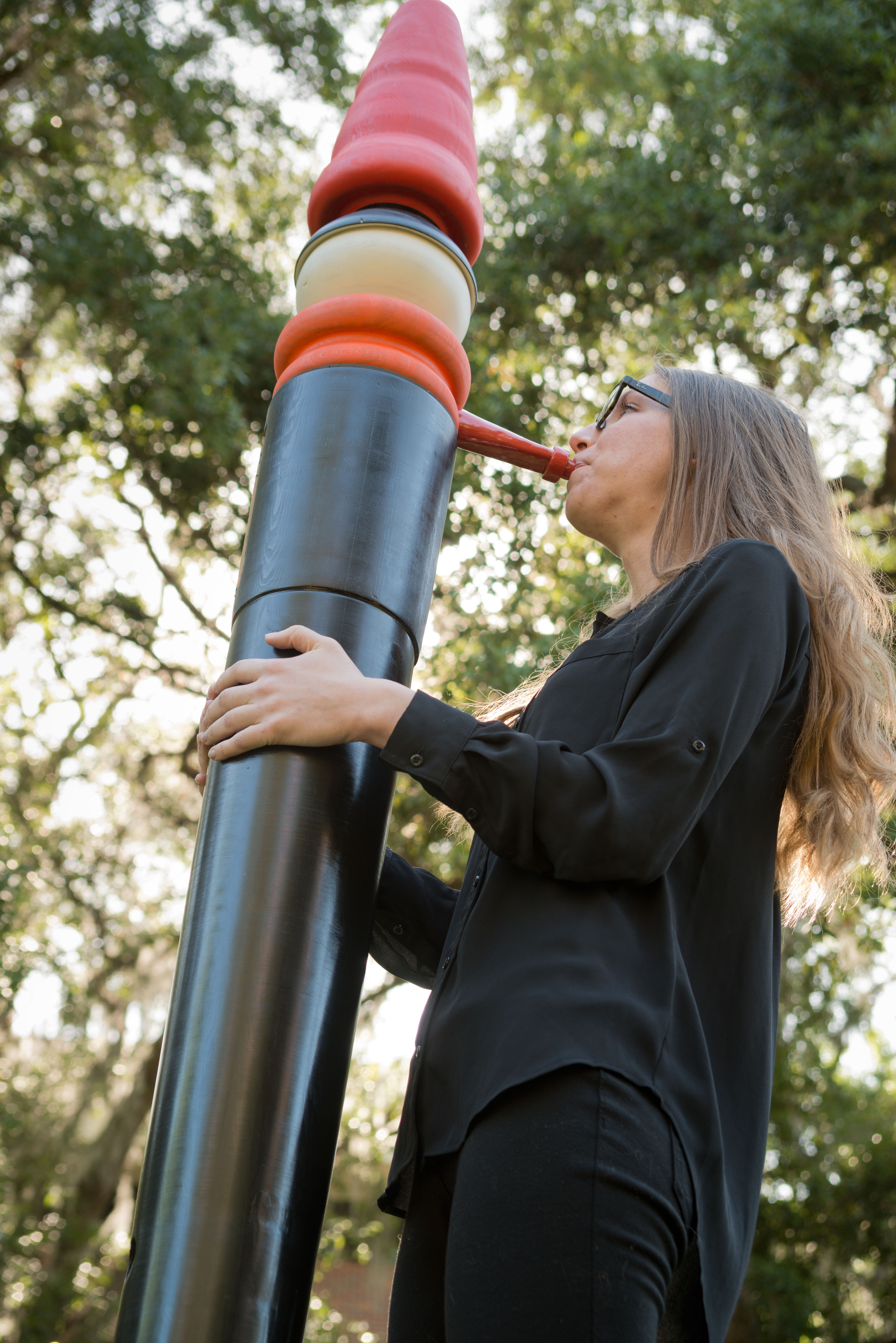 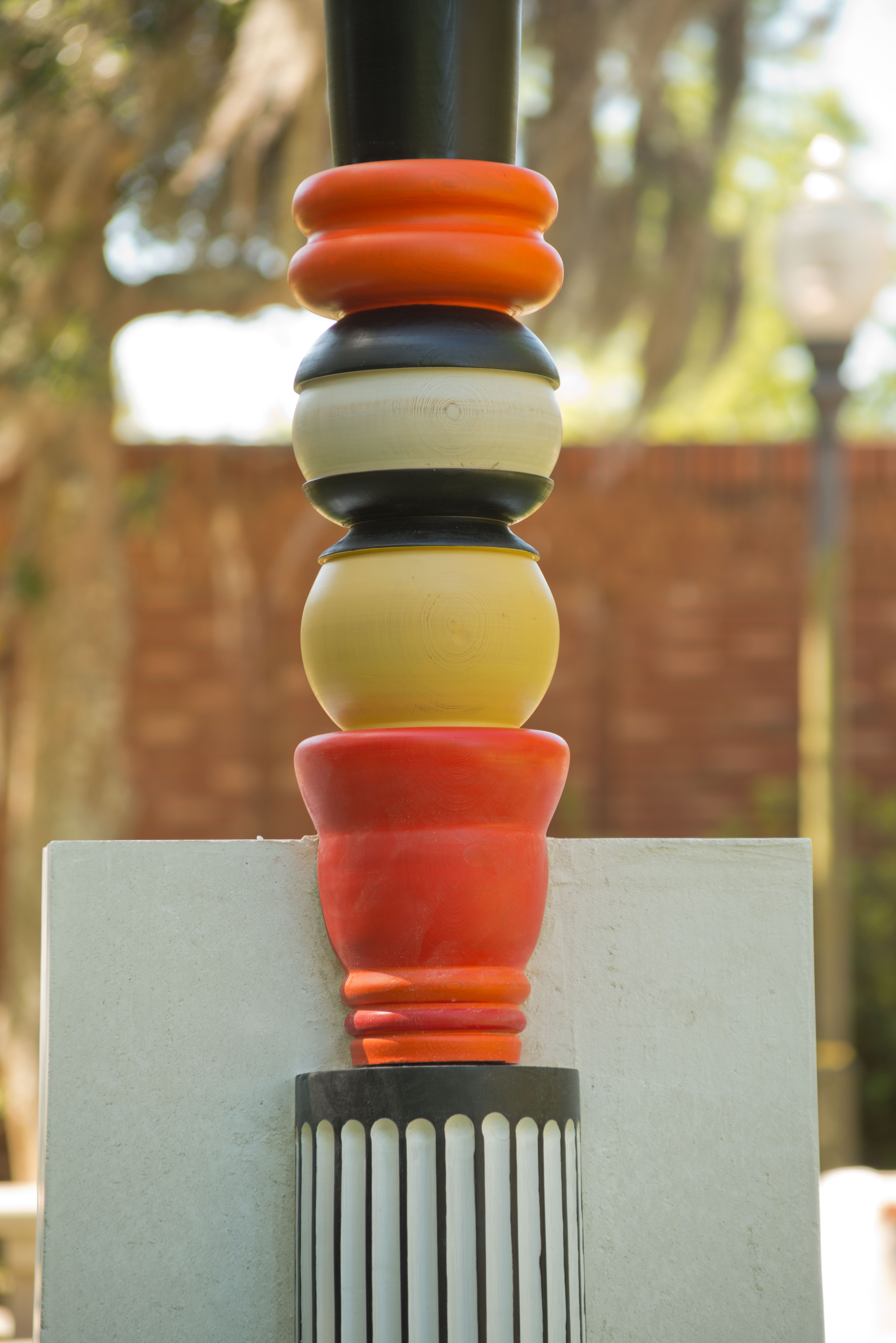 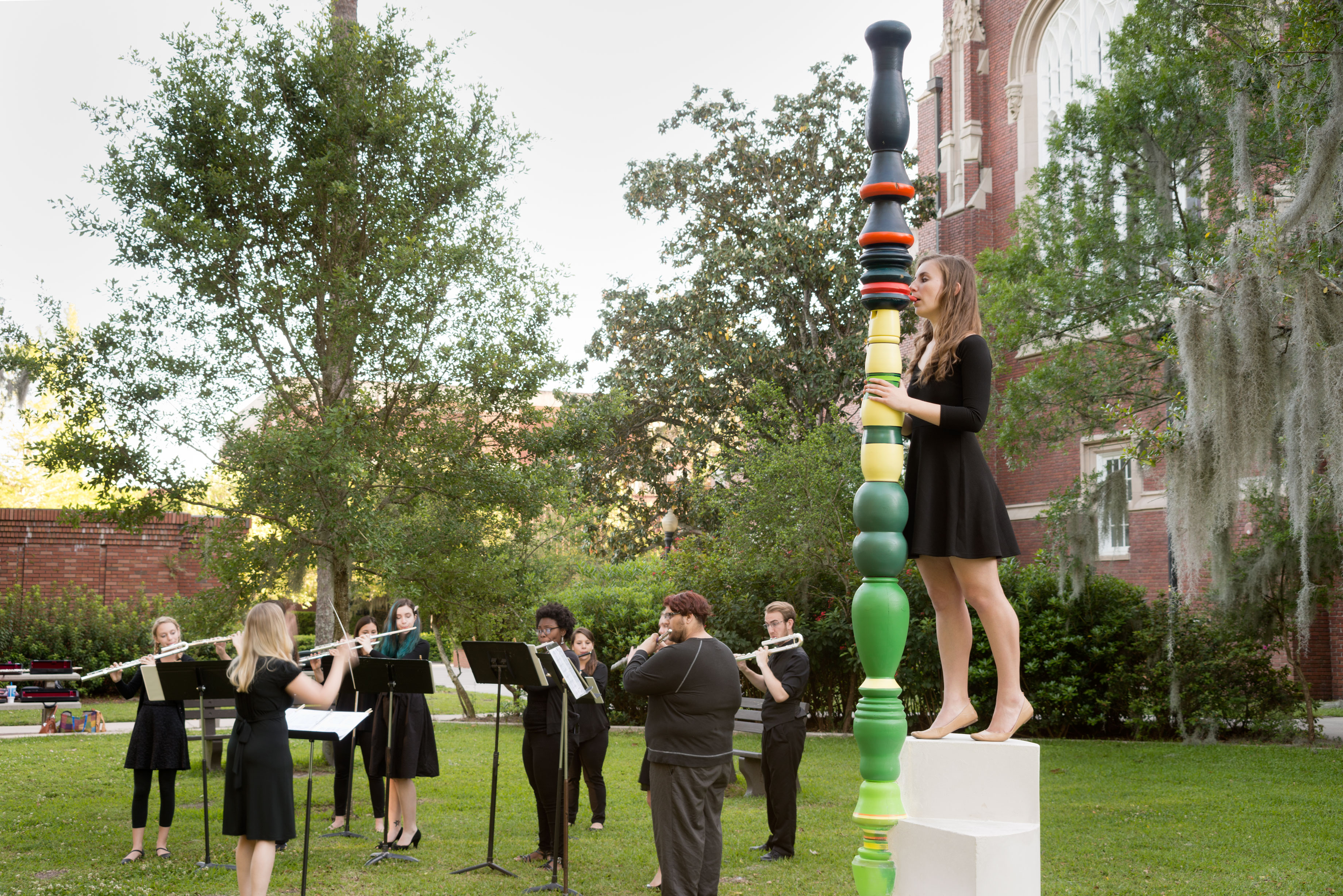 The Periplanómenos Whistles from Rotem Tamir on Vimeo.

The Periplanómenos Whistles by Rotem Tamir

In collaboration with Omri Zin

Performance by Dr. Kristen Stoner and The UF Flute studio

With the support of the Office of the Provost, Creative Campus Committee, School of Art and Art History, University of Florida.